We have been approached by the Stampede Parade organizers, who would like to have a section represent those who have helped our city and residents in a time of need.”

That’s how the letter to those of us involved with YYChelps.ca began.  We got it Tuesday.  Like just about everything about this whole flood response, we threw it all together in a hurry and made something special of it.  We had no idea if we’d have enough folks be able to attend.  We have people with major tugs of emotion both ways.  “I’d like to do this.  Against all my other instincts and workload, I know it is important to be there.“  We have folks anxious to be able to say thank you to Calgarians at large and specifically to the volunteers who have thrown so much time and effort selflessly into making Calgary better again.  We have follks that know the needs of High River and chose to go south and help out the good people down there instead.

No matter what, thank you all.

Someone along the way asked if some of the responders dress in clean up gear.  Yes, I have my comfy pair of cowboy boots, but I chose to dress as I do while going out to help my Flood Friends.  I wore my dust mask and my safety glasses, my steel toed boots, and the new jeans that replaced the tattered pair I’ve worn all week.  Jereme, our wonderful parade marshal, put me up front with the phenomenal Christina Smith to represent those of you who have put in the time and effort to help our friends and neighbours.  Thank you.

Christina told me of when she marched with the athletes in 2002 and the incredible feeling of energy you get from the crowd.  I have never experienced such a thing, but it was astounding to see the standing ovations, the cheering, the clapping, the amazing response from a remarkable city.  Christina, thank you for sharing your story and your time with me.  Thank you for being a remarkable person on your own.  You are a hero.

I walked with Girl Guides, with Red Cross workers, with EMS and with firefighters and I am so incredibly proud to have been included with them.  You folks are the heroes.  You have done remarkable things to keep Calgary safe daily, to rebuild.  You are tomorrows leaders and you are strong.  Thank you for allowing me to be among you today.  I have never been prouder of what you do each and every day.

Perhaps you, the reader, recognized me.  I’m just the same as the literally tens of thousands of Calgarians who have come out to help.  Men and women.  Young and old.  The one single theme is that every single Calgarian who has come to help has cared about their city and has shown their dedication to making it better.  Today I was just an average Calgarian, but an average Calgarian is an extraordinary person.

And I thank each and every one of you.

I know there were hundreds of pictures taken of me today.  I’ll share a few of them below.  Behind the dust mask was the single biggest Stampede Smile you could imagine today.  Gratitude for Calgary.  Thanks for everything you bring to the table.  There are two photos I don’t have - I’m not sure they exist but I sure hope someone got it.  Please send it to me if you find one ( blog a t markzaugg.com or use the contact form).

Twice during the parade I saw hand written signs thanking the volunteers, the first responders, the people who helped as best as we could.  I ran to those folks and hugged them.  It was the single best feeling of the day knowing that we have genuinely and truly touched the lives of our fellow citizens.  A wavering voice of thanks, a half a block of blinking tears from my eyes.  You people are the reason I am proud to be Calgarian.  We will not stop until Calgary is whole again.

Those who stood, those who applauded and cheered, those who whooped and hollered and Ya-hooed! through the parade, I thank you for your enthusiasm, your joy, your appreciation of our city.  Prime Minister Harper, Premier Redford, I genuinely thank you for being part of parade with me.  Mayor Nenshi, I kid you long and often, but this is a truly heart felt thank you for leading this great city through a rough spell and keeping the Calgarian spirit alive and kicking.  A sincere thank you for helping me become an active and engaged citizen of this community, who cares about my city and wants nothing but the best for my friends and neighbours.

Keep Calm and Stampede On, my friends. 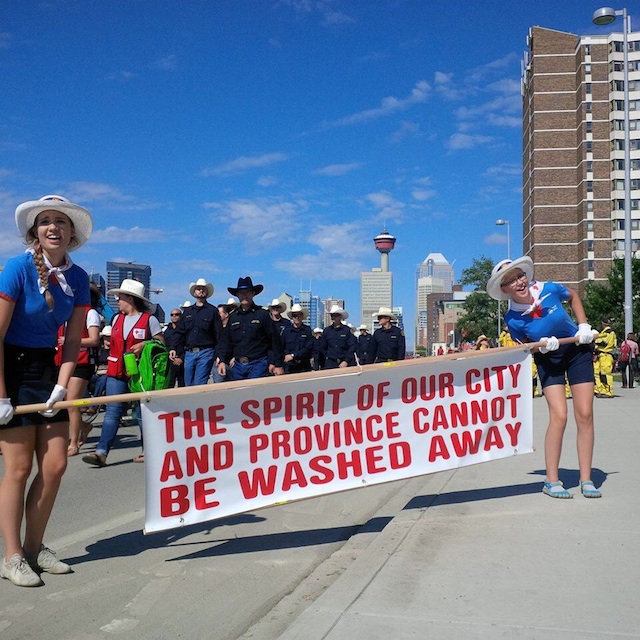 Christina Smith as we passed in front of Prime Minister Harper.  From [@KelleyCryderman](https://twitter.com/KellyCryderman/status/353170746052341760). 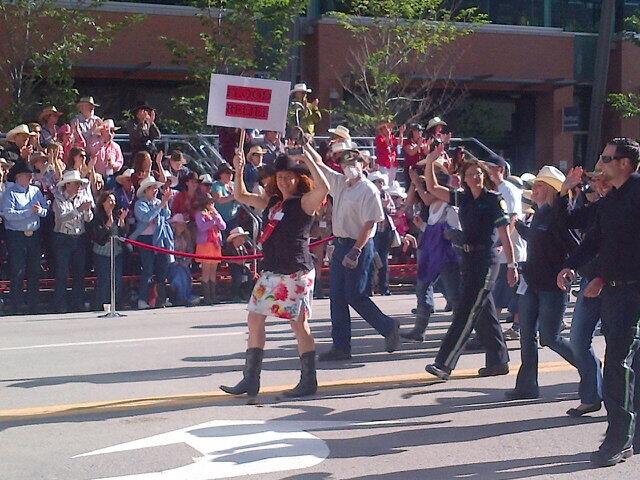 Our Flood Relief First Responders.  From Paula Worthington.  My personal favourite photo of the day. 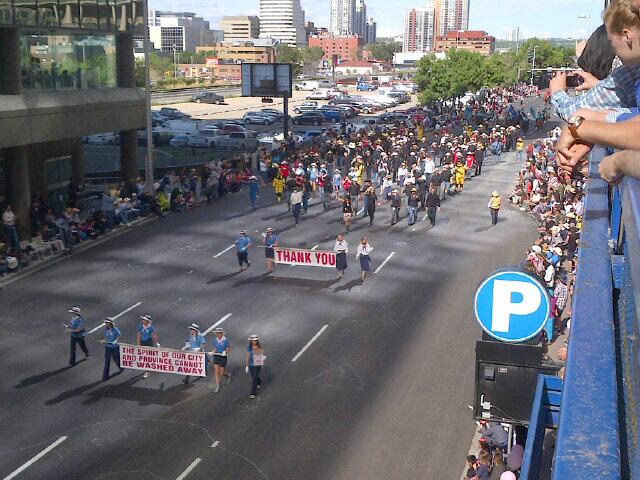 The REAL heros.  From [Phil Kallsen](@PhilKradio). 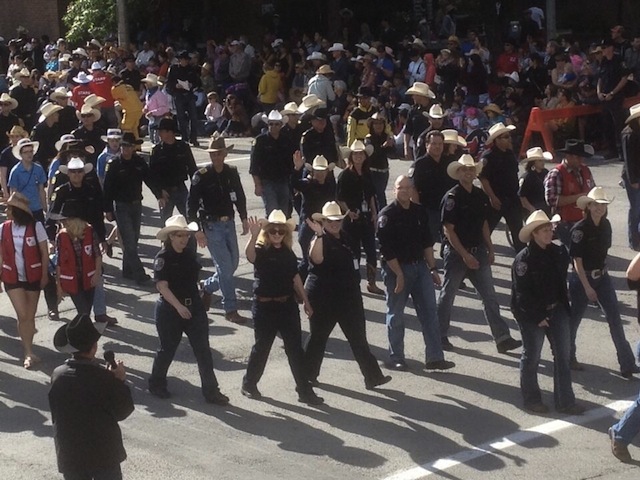 And just a thank you from me.  Just a Calgarian doing one of my 3 Things for Calgary. 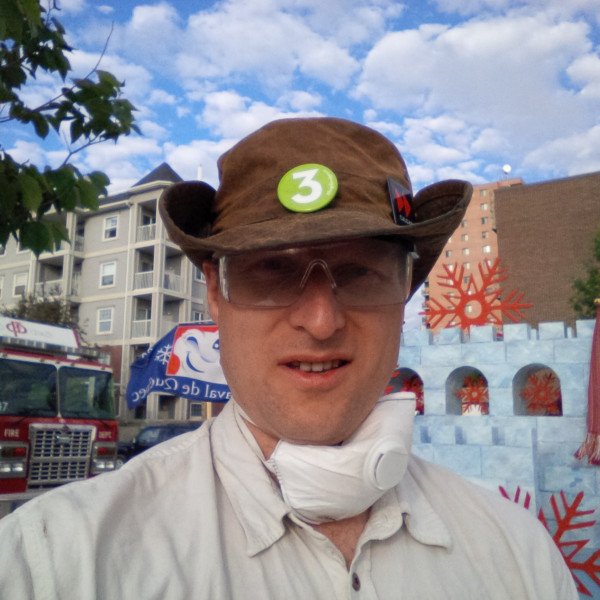