I picked up my BlackBerry Q10 from the post office last night. Tore it open in the parking lot in order to view it in all it’s splendor, then rushed straight home to begin the transition.

It came with a letter that advised me to call my mobile provider (Telus for me) in order to make the transition. That’s opposed to making the change over online. Great, I backed up my Bold 9900 then made the call from my old phone (I haven’t had a landline in five years). The fellow warned me we might get disconnected, he promised to phone back on the new phone in case we did. We did disconnect, my Q10 didn’t pick up the connection, it wasn’t until I did a battery pull that my phone connected with my wireless provider.

After that, it was three hours of unmitigated ecstasy. I’m choosing my words carefully here. I do not want to undersell my Q10 experience.

Before I get into the Q10, let me first explain why I love all things Blackberry. I am one of the people who have felt left behind in the press of smart phone technology. First off, I’m a typist - a good typist and a relatively fast typist. Pressing glass is not typing, - I need the physical responsiveness of a keyboard, the actual click of the keys, to know that I’m typing properly and keeping my speed up. Some days I feel like a teen texting, but I know that in my world speed of getting out messages counts and there is no replacement for a great keyboard. A smart phone without a physical keyboard is pretty dumb for me.

Second, my calendar is my “memory in a bottle.” I rely upon my calendar and alarms to keep me productive. Anything that gets in the way breaks my life, so a premium calendar experience matters.

Third, because I’m an IT professional I need email to work reliably and seamlessly. I have alerts sent directly to my phone so I know when I have a problem. Correspondingly, I have cron jobs that run at 3:00, 4:00 and 5:00 in the morning and I do NOT want to be woken up nightly by an email informing me all went okay.

I may play a game or two to kill time while I’m waiting to pick up my kids or something, but really I’m more concerned with some nice productivity apps - ToDo lists that meet my needs perfectly, a better twitter client that can handle my loads, that sort of thing. I don’t care about a million crappy apps, I want a handful of great apps that extend the phone to match my exact needs and desires.

The iPhone is great for many people, and I love Apple for many things but the iPhone is not for me. Apple’s disinterest in a physical keyboard is disheartening for me. The non-removable battery is not normally an issue, until I go camping with my kids and can’t bring a spare battery for when there are no power outlets about. I love they have an app for everything, but I don’t need a lot of apps when the phone is near perfect out of the box. I want to love an iPhone and integrate it with my technology, but I can’t. That saddens me.

Android has had me hopeful. Coming from the Linux world puts me in a comfort zone. I like that Google has held looser reins and allowed folks to really stretch the ideas of what their smart phone can do. The hardware has let me down so far. Other than some slide phones, there is nothing equivalent to the BlackBerry physical keyboard on offer. The slide phone that I touched wasn’t very good or very responsive. It may be passe, but for me a tactile keyboard makes the difference between a usable phone and a waste of time. When I went to preorder my Q10, I could not even find an Android with a physical keyboard.

In the rush to get the next great thing in smart phones out, I’ve been left in the neglected demographic. I genuinely love my Bold 9900, but I’m less enthralled with the camera and it’s starting to show it’s age.

Doesn’t anyone except BlackBerry care about us? As of today it no longer matters. BlackBerry cares about me and people like me very much. Although it took longer than it should have to deliver, they have delivered the goods in spades!

Other than the network blip I was warned about, the device switch could not have gone more smoothly. I saved my settings to my SD card, took the card from my Bold 9900 and placed it into my Q10 and followed directions. It was painless and I have yet to find a contact, a wifi network, a phone record out of place. Calendar and alarms which are so essential for me transferred so smoothly I forgot to even check until the alarm woke me this morning. Move on up and GO! That was fast and easy. I love those words.

I then rearranged my icons to put my important apps where I want them. Yes, my “camera” icon is a little redundant, let’s call it a placeholder until I adapt to my new phone more. The name of the game here is speed. Things I want quickly or often are available. Call this confirmation of what is important to me on my phone. 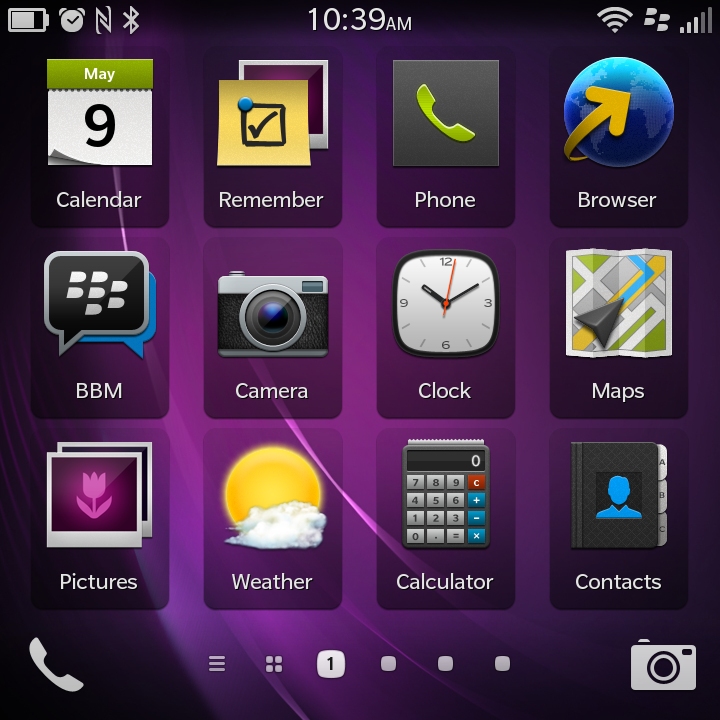 I will mention “Remember” in particular. BlackBerry has merged my ToDo list with my Notes. Given that I somewhat misused Notes on my BB9900, this will take me a while to clean up and evaluate. A really good ToDo app (I survive solely due to ToDo Task Manager on my PlayBook from www.mikesandroidworkshop.com) just may be the trick if I don’t love Remember, but I won’t make a decision for a month or two - complete with potentially more pleading for Mike to port his incredible app if necessary.

This is more than me just talking about icon placement, though. The BlackBerry folks have put together a great design around gestures. By swiping around the screen I can get to things fast. Everything on my phone is easily accessible, even when it’s three screens deep. Drop an icon on another to group them in a folder. This phone has amazing competence to handle and organize many levels of apps and to get to what I want quickly. Not to mention the satisfaction of flicking a completed task away to start something else.

I own (and love) my Playbook, so I’ve had a year to really understand BlackBerry’s concept. It is unique to BlackBerry, it doesn’t take long to grasp, I certainly hope others appreciate what the flick gesture brings to a phone.

The BlackBerry Hub was what I was most interested in. I have heard two opinions about it: Either it is loved as something super-efficient or it has been described as a good idea, but kinda clunky. Having used it, I understand both viewpoints. If it fits your mindset, you will find it instantly useful.

I already like having one place to go to check calls, voice mail, email, text messages, instant messages, and alerts. The hub works for me very well to get a quick update on, “Where am I standing with regards to my day.” Where it does not work is integration with my Twitter account. I follow about 2000 people, few of whom I know personally who I don’t include as regular contacts. Happily it was easy to turn off what doesn’t belong.  I go to the Hub to get my status reports, then drill down when something needs my attention.

I have only hooked in two of my 13 (coff 14 now coff) main email accounts to my Q10. My Playbook will continue to be my “Go to” for email on the go, my phone is my primary source for critical alerts and personal email.  I only had to enter basic information to get email to go. Which is great, I’m going to be entirely reliant on my phone until Google gets a 2 step authenticator working on my Q10. Let’s hope it comes quickly.

The very best of my Q10 is the continuing theme of this post – speed.  A fast processor, a fast setup, a fast way to orient, a fast way to maneuver around my screen and a fast, physical keyboard makes this phone blaze along for me. This has exceeded my expectations which I thought were impossibly high 24 hours ago. Nice work, BlackBerry!

Best of all, I have all those lovely BlackBerry keyboard shortcuts back. Skip the apostrophe and “cant” becomes “can’t” magically before your eyes, now with a splash of colour so I know when “Hell” becomes “He’ll” against my wishes. Click on the screen and it gives a target circle with a cursor in the middle so us fat-finger-folk can actually point to exactly where we want to be. No one has ever put the kind of foresight into keyboard convenience like BlackBerry has. I am loyal if only for that. 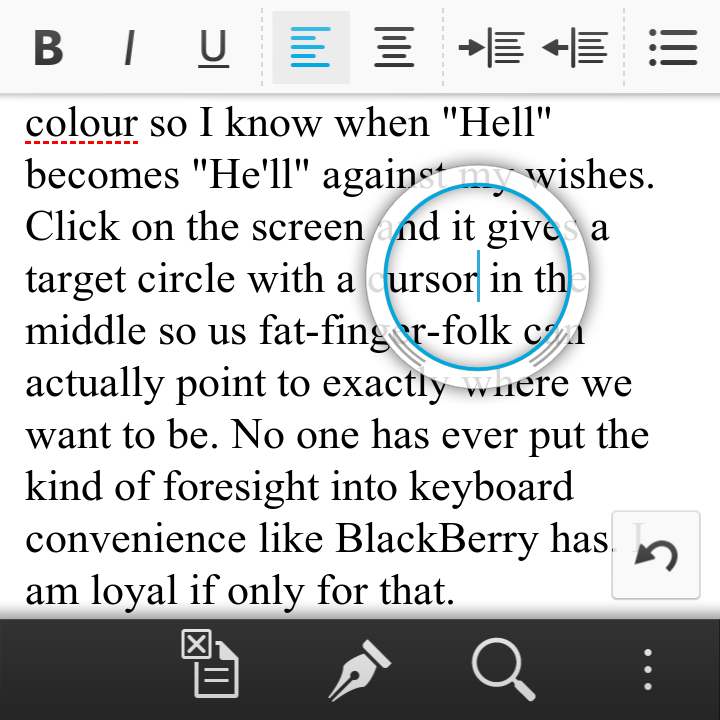 The keyboard is absolutely that good. I’m typing this entire post on it right now. I wouldn’t consider it pushing glass.

No upgrade comes without compromises and I have two worth mention.  I seriously loved my Bold 9900 and losing the trackpad still has me reaching for that space just above the “t” and “y” keys. The reason is a cost in speed. It was just easier to reach a little above the keyboard and be able to move the cursor or click “okay” without slowing down to move my fingers up the length of the screen. A compromise I’m willing to endure thanks to the larger screen and the vastly improved screen navigation BlackBerry has created for this phone.

The other compromise has been Bridge between my Q10 and my PlayBook is nowhere near the experience I enjoyed with my BB9900. I know, the PlayBook is considered the red-haired step child, but as a companion to a BlackBerry smartphone it is a spectacular device. I still enjoy the instant Internet tethering, but I most used my PlayBook to display my calendar by week or month for strategic analysis of my week ahead. I’ve lost that until the new BlackBerry Bridge comes out which can not happen soon enough for me. Please, guys, take some of the profit from my preorder and throw some resources into making that great again.

Most people read poor reviews of the PlayBook and have not experienced the power hidden there. As more Z10 and Q10s are sold, I truly hope BlackBerry fans at least consider a PlayBook as a companion to their phone. They work beautifully beautifully together and increases the usefulness of my phone immensely. Get the Bridge perfect soon so people can enjoy this please!

Overall, I hope I don’t come off as too much of a Fanboi here, but this is the phone I’ve been waiting for. This is very much the promise of BlackBerry’s magnificent keyboard, their email infrastructure and their creative melding of physical keyed entry and gestured touchscreen navigation. There is nothing else like the Q10 available from anyone other than BlackBerry. They really do care about power users like me who rely upon our phones as tools to get us through our day. This is a serious phone with a solid feel and speedy, speedy operation that makes it a joy to use. BlackBerry has delivered an amazing phone that fills my needs. Thankfully someone has.